EXCLUSIVE: Failed Screenwriter from New Jersey Behind One of QAnon’s Most Influential Personas

The following article can be found at: https://www.logically.ai/articles/exclusive-failed-screenwriter-from-new-jersey-behind-one-of-qanons-most-influential-personas

Logically has identified another prolific QAnon player –the pseudonym “Neon Revolt” is linked to Robert Cornero Jr. of Neptune City, New Jersey. After a failed attempt to become a screenwriter in Studio City, CA, he returned home with disdain for Hollywood and embraced QAnon.

On January 6, former 8kun administrator Ron Watkins reached out to a major QAnon influencer via Twitter to help him disseminate a message ahead of the Stop the Steal protests in Washington D.C., a gathering that ended with rioters storming the Capitol building, which in turn resulted in five deaths and many more arrests. Watkins, who had recently been at the forefront in pushing conspiracy theories implicating Dominion Voting Systems in specious allegations of election fraud, yet again claimed to have access to sensational information he wished to share as widely as possible, something he would now refer to as his MOABs (mother of all bombs).

The QAnon influencer in question operates under the handle “Neon Revolt”. Often overlooked given his absence from Twitter, Neon Revolt heads the largest QAnon community on the conservative and extremist-friendly social media site Gab and has, along with Gab CEO Andrew Torba, played a major role in getting QAnon supporters to migrate to the platform. A recent 8kun email leak reported by Bellingcat also shows frequent exchanges between Neon Revolt and 8kun owner Jim Watkins. 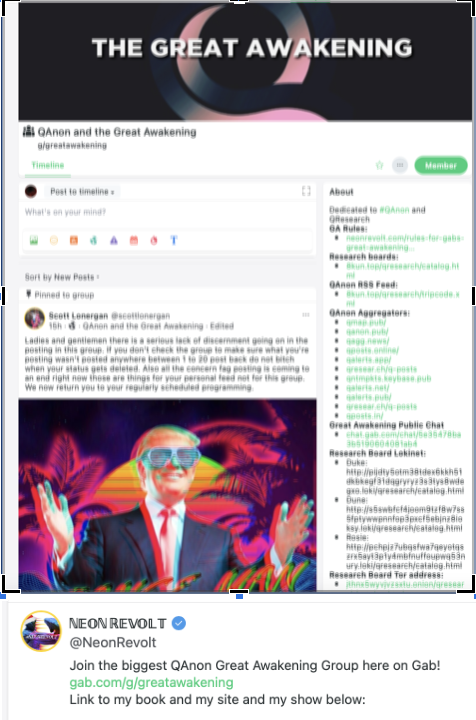 That same day, Neon Revolt posted a three-part blog post on his website. Ron Watkins promptly shared the post with over a half-million followers on Twitter. The Watkins/Neon “MOAB” turned out to be a rehashing of old conspiracy theories, mostly around the murder of former Democratic National Committee employee Seth Rich, but concluded with a message pointing blame at Vice President Mike Pence, who according to Neon was among those who had engineered a “coup against the president.” That same day, Pence announced he would not overturn the results of the 2020 election, a statement that was met with anger by both President Trump and his supporters. As the events in D.C. escalated, so would the anti-Pence rhetoric, with violent rioters outside the Capitol even being captured on video chanting “Hang Pence.” 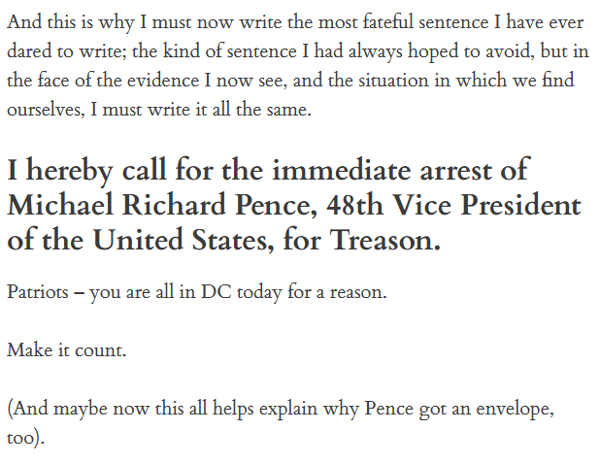 A follower of Q since early 2018, Neon Revolt has been among the most prolific Q influencers, especially when it comes to producing written material about the movement. The fact that Neon was who Ron Watkins decided to go to convert his “MOABs” into blog posts goes to show how much the Watkinses and QAnon as a whole have benefited from having access to someone with the writing skill to effectively spread their message. In 2019, Neon Revolt raised over $150,000 with an Indiegogo campaign to write and publish a book called Revolution Q: The Story of QAnon and the 2nd American Revolution, which he then proceeded to sell back to QAnon supporters. The 660-page Revolution Q would become a highly influential text in the movement and, to this day, it is still sold online in all major stores, including Amazon and Barnes & Noble. 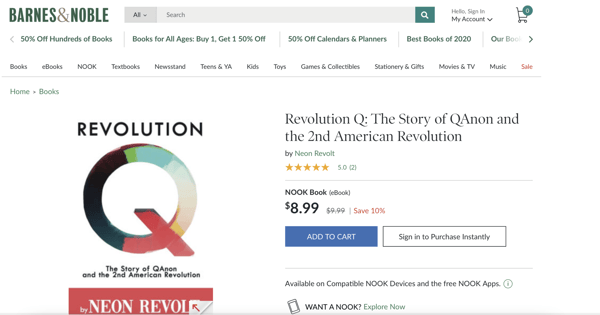 It’s clear that, for someone like Neon Revolt, QAnon is a highly profitable venture, a fact that displeased some followers and earned him the title of “paytriot” among some, an expression often used to describe QAnon supporters who exploit the movement for personal financial gain.

Released in 2019,  Revolution Q: The Story of QAnon and the 2nd American Revolution was published by Salterrae Publishing LLC, a company that seems to have no other books under its belt and is incorporated in Wyoming using a registered agent—a service that allows an LLC (limited liability company) or corporation to designate an unaffiliated party to process and handle their documents and filings. This is why the name Riley Park, who as noted by Fredrick Brennan is an agent also used by 8kun owner Jim Watkins, appears on the company registry as the main point of contact. 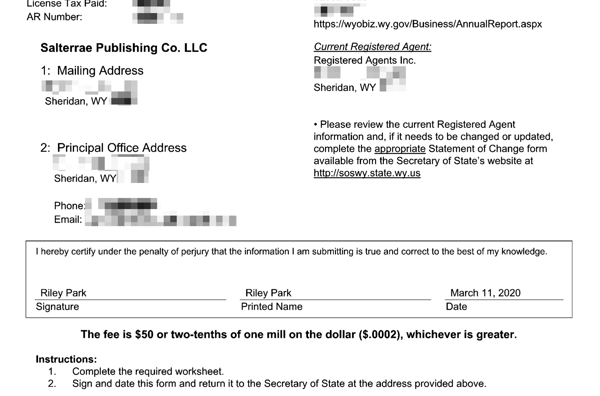 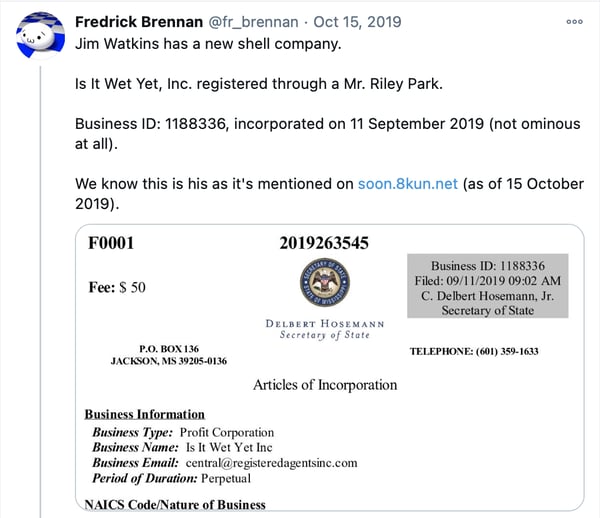 But the fact that the document mentions Wyoming, and that the Indiegogo campaign claims the author is based out of Sheridan, doesn’t necessarily mean that either the publishing company or the author are physically there. In fact, registered agents are often used as a layer of obfuscation, which is why they remain a popular service for shell companies. Upon closer inspection, we were able to conclude that the same Salterrae Publishing is in fact registered as an FLLC (foreign limited liability company) in New Jersey and is a one-man endeavor belonging to a Robert Cornero from Neptune City, NJ. In April 2019, Cornero removed his name and address from the New Jersey FLLC using the services of registered agents in Marlton. 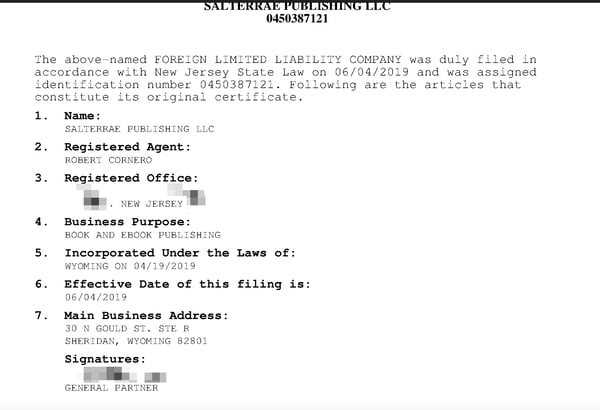 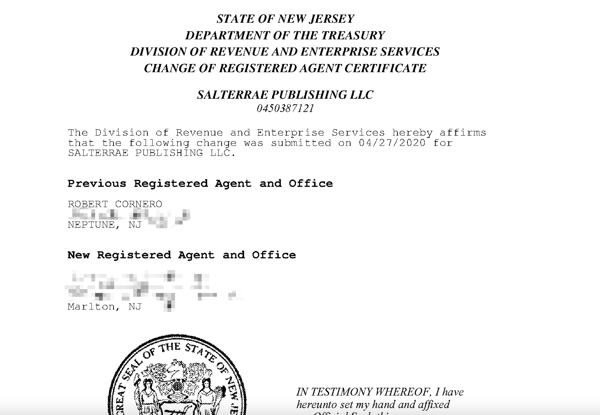 Around 2009, Cornero moved from New Jersey to Studio City, California to pursue a career in film, primarily as a screenwriter. Records from a defunct personal website called Hacking Hollywood show that he offered services as a coach to aspiring screenwriters, and demonstrate an obvious interest in and passion for the film industry. 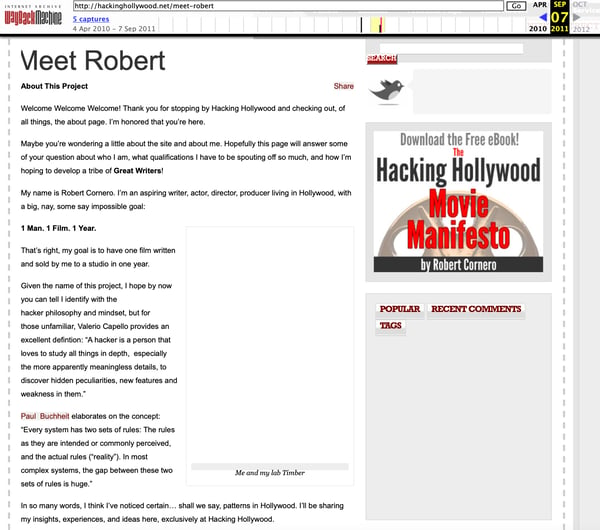 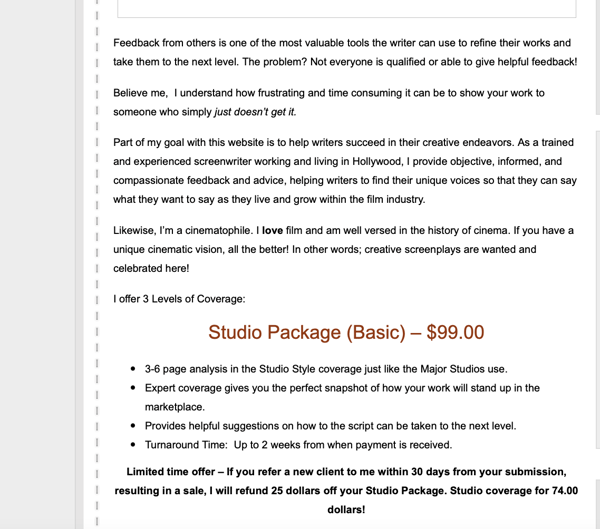 But his Tinseltown experience would eventually turn sour: Cornero can later be seen posting in several forums, expressing his disgust for Hollywood. “BURN IT!” he wrote on Twitter. “BURN THE WHOLE DEGENERATE TOWN DOWN! GLASS THE ENTIRE WEST COAST IF YOU HAVE TO.” 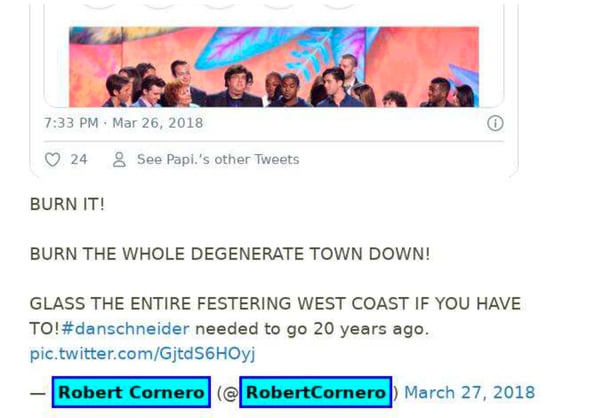 Cornero’s (now-deleted) Twitter account also embraced the Pizzagate conspiracy theory and engaged with QAnon from the very early days. It would appear that around this time Cornero moved back to the family home in New Jersey, to the same address to which Salterrae Publishing is registered, before deleting his social media presence almost entirely. Cornero’s father, a Monmouth University VP of Campus Planning and NJAPPA trustee is also named Robert. For the purpose of disambiguation, both Robert Cornero Sr. and Robert Cornero Jr. were contacted by Logically last week and invited to comment regarding their knowledge and/or involvement in Neon Revolt’s work and Salterrae’s publishing and promotion of QAnon material, but neither had taken the opportunity to comment by the time of publication.

The Making of QAnon: A Crowdsourced Conspiracy